Special Extended Edition Lord of the Rings: Return of the King 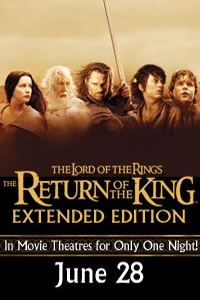 NCM Fathom and Warner Home Video present "The Return of the King: Extended Edition" on June 28, 2011 at 7 p.m. (local time). The event will include a personal introduction from director Peter Jackson captured from the set of his current film and "The Lord of the Rings" prequel "The Hobbit," immediately followed by the feature presentation including nearly an hour of additional feature footage carefully selected under the supervision of director Peter Jackson. Don't miss your chance to see this historic series as it was meant to be seen!