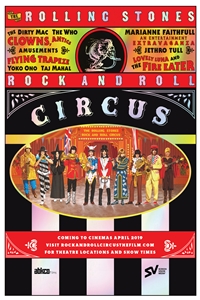 Filmed before a live audience in London, The Rolling Stones Rock and Roll Circus was originally conceived as a BBC-TV special. Directed by Michael Lindsay-Hogg, who had worked on videos for both the Beatles and the Rolling Stones, it centers on the original line up of the Rolling Stones -- Mick Jagger, Keith Richards, Brian Jones, Charlie Watts, Bill Wyman -- who serve as both the show's hosts and featured attraction. The World's Greatest Rock and Roll Band is seen and heard performing six Stones classics-to-be Jumpin' Jack Flash, Parachute Woman, No Expectations, You Can't Always Get What You Want, Sympathy For The Devil and Salt of The Earth. The program also includes extraordinary full-length live performances by The Who, Jethro Tull, Taj Mahal, Marianne Faithfull, Yoko Ono as well as The Dirty Mac, a pioneering ‘supergroup' before the term had even been coined, comprised of Eric Clapton, Keith Richards, Mitch Mitchell and John Lennon.