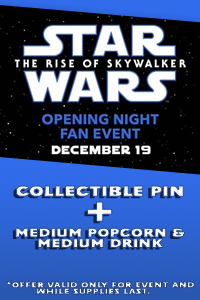 On Thursday, December 19, ahead of it’s official opening on December 20, fans can be among the first to see Star Wars: The Rise of Skywalker by attending an Opening Night Fan Event. Guests attending this will receive a commemorative “Opening Night” pin and a Free Regular Pop & Popcorn (a $10 value!). Star Wars: The Rise of Skywalker will start at 5pm local time, one hour earlier than regular public show times.

STAR WARS: THE RISE OF SKYWALKER contains several sequences with imagery and sustained flashing lights that may affect those who are susceptible to photosensitive epilepsy or have other photosensitivities.